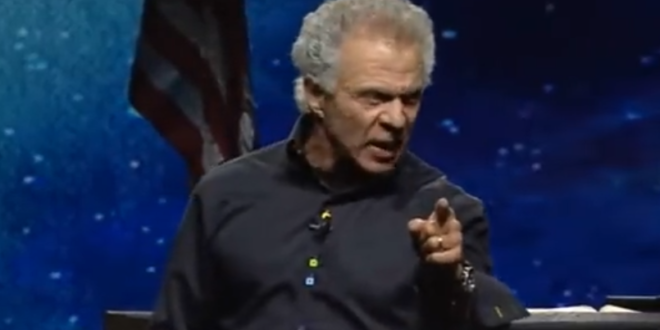 Televangelist: God Is About To Send An “Angelic Army” To Murder The Leaders Of Every Government [VIDEO]

“And God said, ‘Before I get done, there’s gonna be so many dead bodies in America that they will lay in the streets because there will not be room in funeral homes to handle the dead.’ That’s fixin’ to happen!” – Televangelist Kent Christmas, earning an ovation from the packed arena.

Christmas last appeared on JMG in July when he made a similar prediction about God murdering everyone on Earth who doesn’t believe in him. Also: Jesus told him in 2015 that Trump was going to win, “and he did by 80 million votes.”

Why does right-wing pastor Kent Christmas keep prophesying that God is going to kill a whole bunch of people? pic.twitter.com/lTKvFnDNf4

Previous Florida Students Hurl Anti-LGBT Abuse At Classmates
Next Hate Group: Send Money To Help Us Keep Manchin And Sinema On Our Side In The US Senate Filibuster Battle