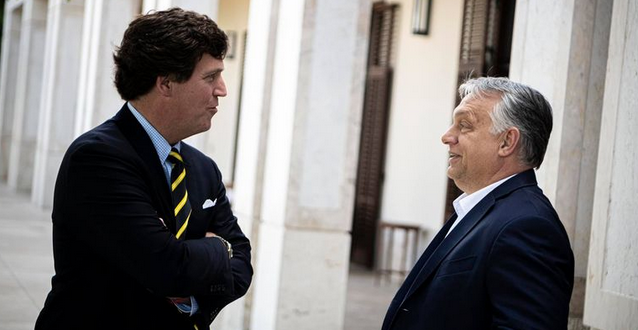 As he was broadcasting from Hungary last week, Fox News host Tucker Carlson presented the Central European country as “freer” than the US and a model for the West.

It’s since come to light that a question Carlson asked during an interview with Hungarian Prime Minister Viktor Orbán about Chinese leader Xi Jinping was scrapped from the official transcript Hungarian officials sent to reporters, which was first pointed out by Ben Novak of the New York Times.

Orbán has a close relationship with Beijing, which has emerged as a thorny issue with the Hungarian leader facing elections in 2022, and has downplayed the Chinese government’s human rights abuses. During the interview, Carlson described Xi as a leader who’s “murdered many of his political opponents.” Orbán avoided the issue and changed the subject.

I’m sorry but this is the best thing out of Tucker’s fun with fascism tour pic.twitter.com/0quBXlsVuL

When Tucker says that Hungary is more free than America, what is he actually talking about?
Is he arguing that Hungary’s rigged elections are more free than ours? Or that the Orban-dominated media has greater freedom of the press? (thread)https://t.co/pn6GwxCrpk

Is Hungary more free because Orban has shredded the country’s democratic institutions and now rules by decree?

When Tucker says Hungary is more free than we are, is he talking about the new ban of depictions of homosexuality…

Because Orban has much better relations with the Chinese communists than with the United States. https://t.co/hPNaXUD6Ki

The context: #Hungary is forming deep investment alliances with Xi Jinping and criticism of China is stifled by Orban’s government. https://t.co/61FPzttelq