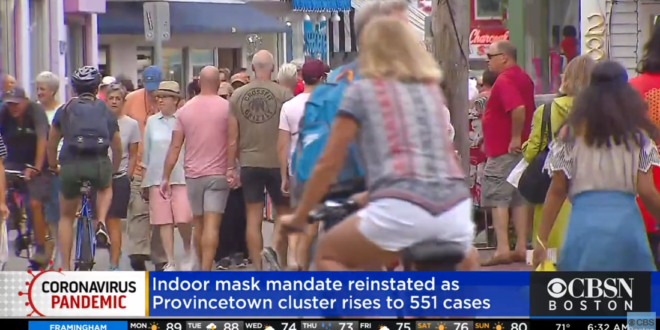 How A Gay Scientist Helped The CDC In Provincetown

The Centers for Disease Control and Prevention has a lot of ways to pick up on COVID-19 outbreaks, but those methods often take awhile to bear fruit.

Not so with the Provincetown, Mass., cluster that started around July Fourth weekend. “We triggered the investigation as people were getting symptomatic,” says Demetre Daskalakis, a deputy incident manager for the CDC’s COVID-19 Response. “Pretty amazing — it is warp speed.”

How did they do that? It was thanks to a tip from a citizen scientist named Michael Donnelly. A data scientist in New York City’s tech sector, he started publishing his own coronavirus data reports early in the pandemic and launched a website, COVIDoutlook.info, with Drexel University epidemiologist Michael LeVasseur.

Read the full article. It’s quite the fascinating moment-by-moment account of how Donnelly first realized that Provincetown’s breakthrough cases were, according to what was then known, statistically unlikely and how he worked the networks of vacationing gay men who eagerly provided assistance.

When Michael Donnelly heard that his vaccinated friends were getting sick during an annual gay pilgrimage to P-town, he began to document the cases — 51 in all — and tipped off health officials.

His work helped the CDC learn about Delta at “warp speed.”https://t.co/1zAPOBAOba

Gay men’s relationship to public health has been “tempered by fire because of HIV,” says CDC’s Daskalakis. “This is an awesome public health moment,” he says. “It’s a community that believes in science and public health stepping up to the plate.” https://t.co/SDa3CqkmlC

“You haven’t lived until you’ve talked about twinks with the CDC.”
–@donnellymjd to @selenasd https://t.co/sH5pQkYBZm