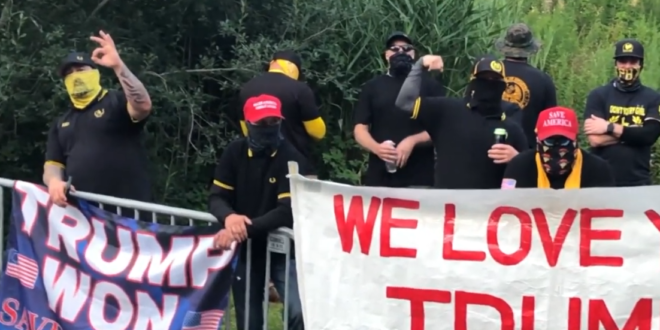 Pro and anti-Donald Trump protesters lined a street outside a Briarcliff Manor golf course Thursday night as the former president made an appearance at a fundraiser for New York’s GOP. On one side of Dalmeny Road were pro-Trump supporters holding signs that read “Trump Won” and “We Love Trump.”

Members of the Proud Boys, designated a hate group by the Southern Poverty Law Center, posed in black T-shirts with “Free all Political Prisoners 1/6/21” across the front, a reference to the January riots at the U.S. Capitol. “Free the Boys!,” they shouted.

Proud Boys out in force for a Republican fundraiser hosted by Trump at his golf course in Briarcliff, NY. Stay classy @GOP pic.twitter.com/4dVl2DmOXa

Getting footage in from a white supremacist rally in Briarcliff Manor in support of Trump, who is headlining a @GOP fundraiser for right wing candidates in New York. Proud Boys flash the white power symbol. pic.twitter.com/XAMxPssKO0

Look who showed up for Trump last night in Briarcliff, NY. pic.twitter.com/qptkofCGov

For the second night in a row, there was a demonstration outside Westchester County golf club, in NJ.
Anti-Trump supporters on one side of Dalmeny Road in Briarcliff and pro-Trump supporters on the other.
The Proud Boys showed up last night demanding prisoners from J6 be released pic.twitter.com/FuGqGd3Tmg

The NY GOP held a fundraiser tonight in Westchester, featuring the former guy. The Proud Boys showed up to support their idol and spread their message of white supremacy. Disgusting. pic.twitter.com/08yKWY2KWg