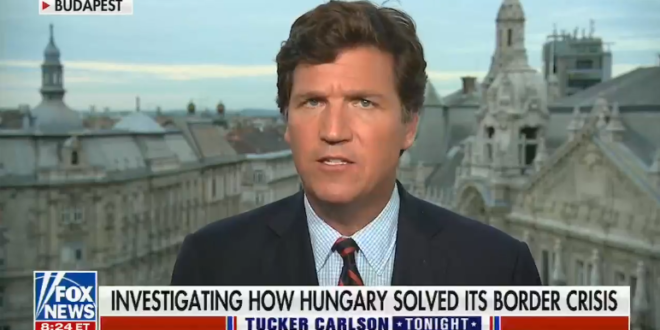 “Because the example of Hungary is so powerful — not just in Europe, but to the world, to the entire world, not simply the west — what you can do with a relatively small economy and not many people, if you’re just serious about keeping your nation from being destroyed.

“Because the lessons are so obvious, and there’s such a clear refutation to the policies we currently have, and the people who instituted those policies, Hungary and its government have been ruthlessly attacked and unfairly attacked.

“It’s authoritarian, they’re fascists! That is — there are many lies being told right now, that may be the greatest of all.” – Tucker Carlson, doing his show from Budapest after meeting with PM Viktor Orban.

On March 30, the Hungarian parliament voted to allow Prime Minister Viktor Orbán to rule by decree indefinitely, giving him dictatorial powers for at least the foreseeable future. Orbán can suspend existing laws or enact new ones—all with de facto parliamentary approval and without a known end date.

The law also criminalizes spreading false or distorted facts that interfere with the public safety or are “suitable for alarming or agitating” the public, crimes punishable by several years in prison. Concerningly, this language is vague enough to cover anyone who challenges the government’s preferred narratives and handling of the coronavirus.