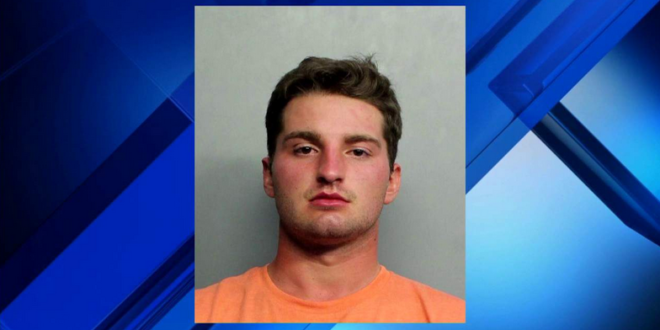 A passenger aboard a Frontier Airlines flight has been charged with three counts of battery. The passenger is accused of inappropriately touching two female flight attendants and punching a male attendant on Saturday. The flight crew then restrained the unruly passenger and used tape to ensure he stayed seated for the remainder of the flight.

While traveling from Philadelphia to Miami, Maxwell Wilkinson Berry, 22, was caught on camera shouting at the flight crew and other passengers. “My parents are worth more than f****** 2 million goddamn dollars!” Berry shouted. He continued to cry out, hollering at everyone within earshot, and declared that his grandfather is an attorney.

According to police, Berry touched a flight attendant’s butt with his empty cup and she told him, “don’t touch me.” Police said in its report that Berry spilled his third drink on himself and went to the bathroom from seat 28D, and emerged from there with no shirt on. A flight attendant told him he needed to be fully dressed and helped him find a shirt in his carry-on, police said.

This will forever be the most dehumanizing experience in my entire life. Many people laughed and ridiculed me as I was mistreated by staff of a PROFESSIONAL airline. Just to make matters worth this has gone “viral” on the internet and will never disappear. My life will never be https://t.co/ucf5YnnfJY

#frontier #frontierairlines crazy it happened right beside, me it’s crazy out here pic.twitter.com/YdjURlSb5p

Frontier passenger screamed his parents are worth $2 million, before punching a #flight attendant.#Frontier suspended the crew for duct taping the passenger to his seat as they landed in #Miami.
22 yr old Max Berry is in custody. (@SweeneyABC) pic.twitter.com/6YUc65xI6j

Frontier Airlines now says it “supports” and will pay the crew of flight attendants it had earlier said were suspended after restraining a passenger charged with groping and punching them. https://t.co/a7XxUPFaWp

Within hours of the largest flight attendant union demanding support for the suspended crew, Frontier is out with a new statement. Frontier says their first statement was rushed, but still will not say if the flight attendants were initially suspended for violating policy. pic.twitter.com/uTyvEWczda

I could buy that jank ass airline if I wanted to. Fuck out my face