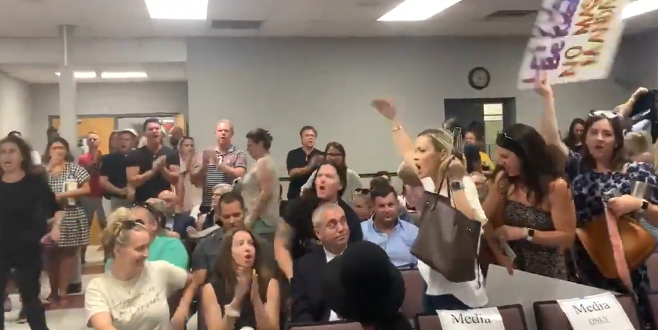 Hundreds of parents attended the Williamson County School Board meeting Tuesday night where a roughly four-hour debate took place over the district’s mask policy. The board voted 7-to-3 to pass a temporary mask mandate for elementary school students, staff, and visitors. Hundreds of parents who didn’t fit inside the auditorium stayed outside the board meeting shouting “no more masks” during a heated protest.

“The real part of the clown show is that you all think you actually have the authority to mandate this. Because there are these books that I have, and I have them as a gift for you, the Constitution and the Declaration of Independence, The Bill of Rights, and the Federalist Papers. Also the Bible. And these guarantee my freedom and yours and our children’s to breathe oxygen,” a parent said.

😷 WILLIAMSON COUNTY ANTI-MASKERS: “We know who you are! We will find you! You’ll never be allowed in public again!”

A doctor who testified for a mask mandate is hassled and threatened on the way out.

Anti-mask demonstrators heckle masked people (some of whom are Drs/nurses) leaving 08/10/21 #Williamsoncountytn #schoolboardmeeting following one man to his car and shouting “we will find you” & “we know who you are” @WilliamsonHmPg 1/2 pic.twitter.com/u8wbdfr3Xj

The board of education will not take you seriously until you start getting serious.

They honestly believe they own your children. Mass withdrawals will remind them they do not.
Each child=money they receive.

Here’s the video I tried to tweet earlier but wouldn’t go through. A man was being disruptive during the Williamson County Schools meeting and deputies escorted him out. Dozens of enraged anti-mask parents followed. pic.twitter.com/5LXDCJiInW

I’m still in disbelief over the WCS board meeting. I’ve never witnessed a public meeting devolve into chaos, threats and drama the way I did last night over safety and health precautions.

I’ve picked up about 400 new followers since then, so ICYMI: https://t.co/yRW6XeTgy2

Chelsey Gilbert is speaking with her daughter beside her and brought a box of masks to the meeting to say they can’t keep people from getting sick.
She claims that wearing masks can get people sick. She calls on the board to tests the masks to see what’s on them.

A parent shouts “I wouldn’t take my child to a doctor these days if it would save my life.” Now the board chair is once again scolding interrupters.

Lee Baker calls herself a “California refugee” and “gave it all up for freedom” by coming to Tennessee.

She said her kids are “vaccine injured” and had seizures after they were vaccinated. She’d never put them in a mask “because the brain needs oxygen to grow.”

.@ClayTravis is speaking. He’s got two kids in WCS.

“You all should be ashamed of the choices you’re about to make,” he said to the board. He says masks don’t work and called them “cosmetic theater.”

“Refuse! Refuse” he shouts. Board chair tells him his time is up.