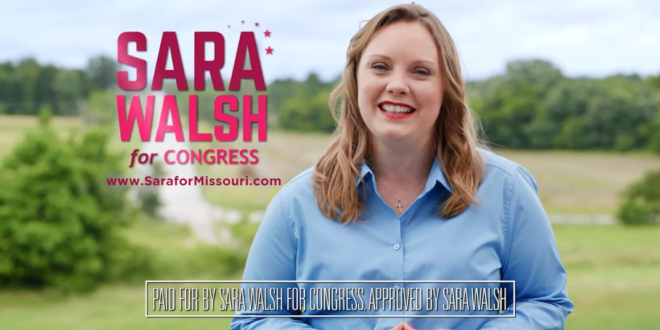 State Rep. Sara Walsh and her husband have contracted COVID-19, with Steve Walsh hospitalized on a ventilator. Sara Walsh, a Republican running for U.S. Rep. Vicky Hartzler’s seat in Congress, has been recovering at home. Steve Walsh is Hartzler’s spokesman.

The couple was not vaccinated against COVID-19. Sara Walsh said she did not get the vaccine because it has not been fully approved the federal Food and Drug Administration and she was concerned about risk factors, KRCG reported.

She also said she had friends who had negative reactions to the vaccine and she was not concerned about being vaccinated because she had been healthy since the pandemic began. Reached briefly by phone, Sara Walsh was coughing and requested to communicate by text.

State Rep. Sara Walsh and her husband, Steve, have contracted COVID-19, with Steve Walsh hospitalized on a ventilator.https://t.co/2DgRVIf53T

Friends, please pray for my precious husband @Stevewalsh2010. He is very sick and is in the hospital. We serve a miracle working God and tonight please help me get prayers lifted up for Steve’s healing and recovery. Steve is my sweet love and my best friend in the whole world. pic.twitter.com/Rt0IWnKLHH

After months of speculation, Congresswoman @RepHartzler jumped into the U.S. Senate race Thursday — becoming the first congressional official and woman to do so. #mosenhttps://t.co/QTludWkkEl

RELATED: Rep. Vicky Hartzler is one of the most vicious opponents of LGBT rights in the House, which is saying something. She appeared on JMG in 2019 when she hosted ex-gay torture advocates in her office next door to Rep. Ted Lieu, who had introduced a bill to ban the practice. Hartzler was among the 146 GOP House reps who voted to overturn the presidential election. Before being elected to Congress, Hartzler headed the Missouri Coalition to Protect Marriage, which in 2004 backed the successful campaign to install a statewide constitutional ban on same-sex marriage. Hartzler has compared same-sex marriage to incest and pedophilia.