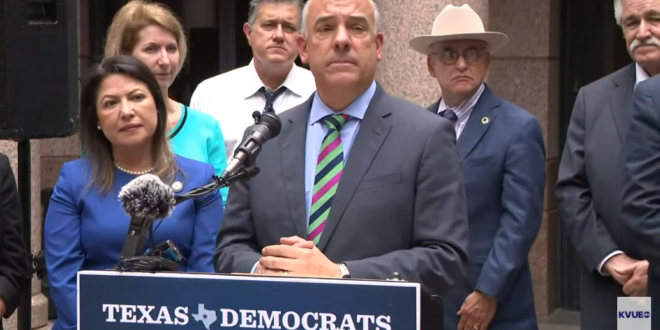 Democrats in the Texas Legislature are making plans to flee the state on Monday ahead of expected votes on new voting laws, and head to Washington to spotlight what they say is a crippling Republican assault on the ability to cast a ballot.

The group had arranged for a pair of chartered flights from Austin with plans to arrive in the nation’s capital by the early evening. It was unclear as of midday how many Democrats might flee and if it would be enough to prevent Texas Republicans from attaining a quorum, which is required to conduct state business.

The cohort of Democrats were aiming to transform themselves into the nation’s new symbols in the fight for voting rights, according to several people familiar with their plans. The goal is to apply pressure to Senate Democrats who so far have been unable to pass federal legislation to address the issue.

You may recall that Oregon Republicans left the state in 2019 and 2020 to thwart a vote on climate change, prompting Gov. Kate Brown in the 2019 incident to authorize the state police to bring them back.

Breaking News: Texas Democrats are making plans to flee the state on chartered flights to Washington, D.C., a dramatic attempt to block a sweeping Republican bill to restrict voting. It’s unclear if enough will join to prevent the bill from moving forward. https://t.co/9bTdtaBwnn

Previous Texas AG Unblocks Twitter Critics After ACLU Lawsuit
Next Newsmax Host: Diseases Are Meant To Wipe Out A Certain Number Of People, Vaxxes Are Against Nature