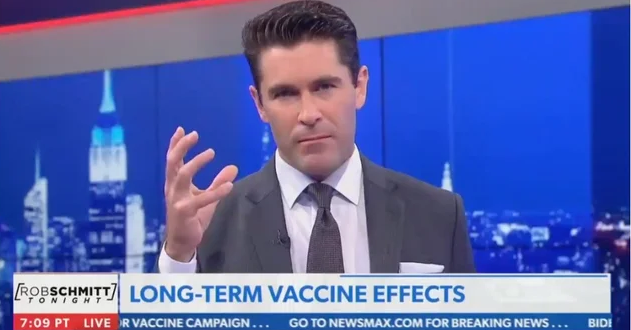 Newsmax Host: Diseases Are Meant To Wipe Out A Certain Number Of People, Vaxxes Are Against Nature

“You know, one thing I’ve always thought, and maybe you can guide me on this because, obviously, I’m not a doctor.

“But I’ve always thought about vaccines, and I always think about just nature and the way everything works. And I feel like a vaccination in a weird way is just generally kind of going against nature.

“Like, I mean, if there is some disease out there — maybe there’s just an ebb and flow to life where something’s supposed to wipe out a certain amount of people, and that’s just kind of the way evolution goes.

“Vaccines kind of stand in the way of that. Do you follow what I’m saying? Does that make sense to somebody in medicine?” – Newsmax host Rob Schmitt.

Schmitt last appeared on JMG when he declared that killer cop Derek Chauvin was “sacrificed to the mob.”

Newsmax host suggests vaccines are “against nature,” and some diseases are “supposed to wipe out a certain amount of people”https://t.co/g1sIdQ949b pic.twitter.com/TgQNFLKAav