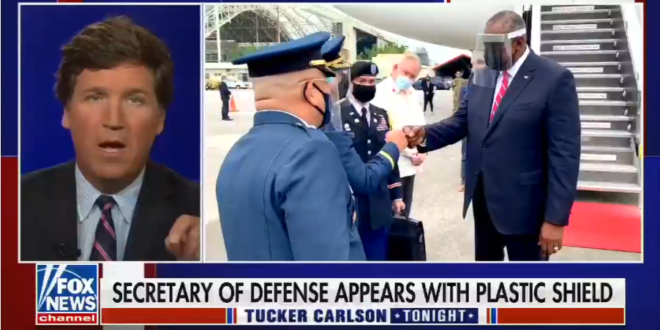 “Today the secretary of defense appeared in public wearing this costume. That’s Mr. Lloyd Austin, ladies and gentlemen, the man in charge of our weapons systems.

“What’s he got on there? Is that a welder’s mask? Is it a dental visor? Has Lloyd Austin been cleaning teeth this morning? Nope. Looks like Lloyd Austin is just terrified of COVID.

“Well then, why doesn’t he lose weight? Quite a bit of weight actually. That’s a good question. That would be the rational response. So, of course, he has not even considered that.

“Lloyd Austin instead got the vaccine. But he is still so petrified of corona that he put a windshield over his face and demanded that all of his dutiful little minions do the same – an entire army of dental hygienists. Watch out, China. Move against Taiwan and we’ll scrape the tartar off your molars.

“And yet, even after all of those comically elaborate precautions, Lloyd Austin still looks scared for his life. Notice how he bumps their hands instead of shaking them.

“How long before Lloyd Austin is wearing surgical gloves in the shower and zip-tying garbage bags around his feet?

“The United States military is being run by a neurotic cat lady. Our entire government is at this point.” – Tucker Carlson, on Austin’s visit to the Philippines, where face shields are mandatory for visitors.

We were told prior to arrival in Manila that the Philippines required everyone getting off @SecDef ‘s plane to wear a mask and face shield. I am traveling with Austin as a member of the press and had to wear both as well. #COVID19 cases are surging here. https://t.co/CKVng6HLhI