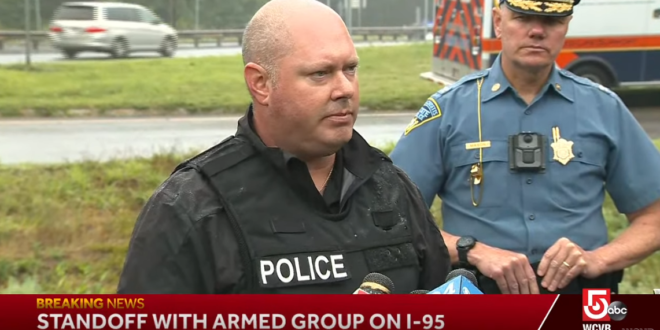 A standoff between police and several armed individuals caused the closure of a part of Interstate 95 overnight. The situation also led to a shelter-in-place order for parts of the communities of Wakefield and Reading. The situation began when a trooper spotted two vehicles in the breakdown lane and stopped to offer assistance around 1:30 a.m. Saturday, according to Massachusetts State Police Col. Christopher Mason.

Mason said the trooper observed the group of 8 to 10 men trying to refuel a vehicle and saw they were wearing tactical-style gear. They were armed with a combination of rifles and pistols. The trooper asked the men for identification and called for backup. A group calling themselves “Moorish American Arms” posted a video on Instagram overnight showing armed members blocking the highway.

State Police Col. Christopher Mason said the men have identified themselves as being part of a group known as Rise of the Moors. According to the Southern Poverty Law Center’s website, the Moorish sovereign citizen movement is a collection of independent organizations and lone individuals that emerged in the early 1990s as an offshoot of the antigovernment sovereign citizens movement, which believes that individual citizens hold sovereignty over, and are independent of, the authority of federal and state governments.

A bizarre incident is playing out Saturday morning in Wakefield, Massachusetts. According to local police: “during a motor vehicle stop, several heavily armed men claiming to be from a group that does not recognize our laws exited their vehicles and fled into the woodline” near Interstate Highway 95.

The incident unfolded around 1:30 a.m. when a state trooper came across a group of 8 to 10 people refueling on the side of the I-95 highway in Wakefield, a suburb of Boston. The group was dressed in military-style uniforms, carried tactical gear like body cameras and helmets and had long guns slung over their shoulders.

We have several armed persons accounted for at this scene on Rt 95. They are refusing to comply with orders to provide their information and put down their weapons. We are asking residents of Wakefield and Reading to shelter in place at this time. https://t.co/DTPA6QEsC8

Two suspects have been arrested by members of @NEMLEC on North Ave, Wakefield. MSP has taken custody of and transported them to one of our barracks. The situation is ongoing w/remaining members of the group. We continue to work to resolve the situation peacefully. https://t.co/1bZWM1vYKS

Video from the area in Wakefield where two of the men from this group described by police as one that “does not recognize our laws” are under arrest. Now being driven away. There are still other suspects on 95 which is still shut down. #WCVB https://t.co/YXfHZPUjh5 pic.twitter.com/hsbPUYCnim

#BREAKING: This video titled ‘Moroccan peace” – live-streamed on @YouTube a couple hours ago – appears to be from a member of the group that has led to a police standoff which has shut down part of I-95 in the Wakefield/Reading area https://t.co/DrvUWhNcFz