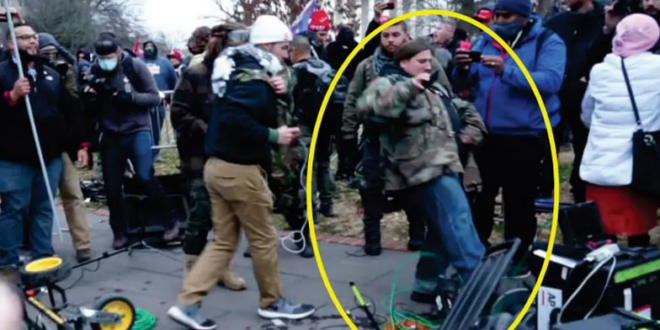 Gabriel Brown, a YouTuber and Proud Boy who has rallied at Charlottesville and other fascist scenes, was arrested by the FBI today on charges of violence, property destruction and disorderly conduct at the January 6 riot.

Brown, 38, of the village of Bayville on Long Island, NY, “kicked and/or stomped on media equipment and verbally encouraged others to steal and destroy media equipment,” the FBI criminal complaint stated. Brown recorded himself and the event for his GB0083 YouTube channel, the FBI said.

“F*ck the AP. You f*cking frauds. You want to f*cking lie about all of us. Well, you know what, here, report this sh*t! Because your f*cking media is dead mother f*cker. It’s dead, the legacy media is dead.”

Here’s a Capitol update that #seditionhunters have been waiting for: Gabriel Brown — who repeatedly said his name and even signed it — has been arrested. He was FBI 204-AOM and #IAmGabeBrownPB. pic.twitter.com/hcRSm0yA9J

#CapitolRiot: Two new cases just unsealed. First off, Gabriel Brown, of Bayville, New York, has been charged with entering a restricted grounds, committing an act of violence on Capitol grounds and destruction of property. The FBI says he signed his name on video. @wusa9 pic.twitter.com/gfxE1pjq9x

[BREAKING] Proud Boy Gabe Brown has been arrested. He is the second arrest related to attack on the media. #ProudBoys #FAFO #POYB #IAmGabeBrown https://t.co/Ir7ELIVBRX

Previous Texas Gov Bars Press From Border Event With Trump
Next FBI Arrests YouTuber In Capitol Riot, Asks Trump To Pay His Legal Defense: “This All Happened Because Of You”