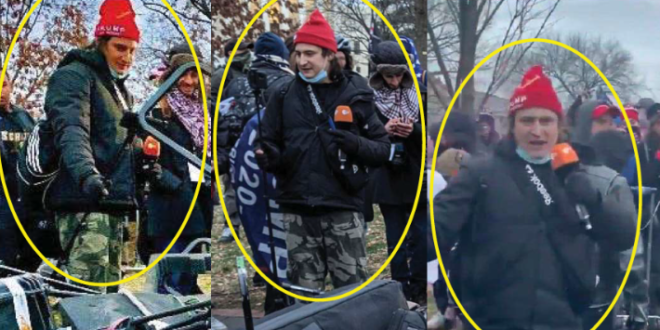 FBI Arrests YouTuber In Capitol Riot, Asks Trump To Pay His Legal Defense: “This All Happened Because Of You”

Zvonimir Jurlina, of Farmington, New York is charged with destruction of property in a special jurisdiction and committing an act of physical violence on Capitol grounds. According to court documents filed Monday, Jurlina allegedly posted multiple videos to his “Zykotik” YouTube page appearing to show him participating in the Capitol riot. Investigators say those videos showed Jurlina kicking and trying to set cameras and other equipment on fire.

In a video that’s since been removed from his YouTube page, Zurlina describes himself as a patriot, and calls on former President Donald Trump to pay for his defense. “I am a real American patriot,” Jurlina says. “But I would like to say, Donald Trump, please pay for my legal fees, because this all happened because of you.” Jurlina was taken into custody Monday in Austin, Texas.

“Donald Trump, please pay for my legal fees because this all happened because of you okay, how bout that?”
– Jan 6th insurrectionist Zvonimir Jurlinapic.twitter.com/H11lt9fMzx

Murlina is accused of taking, attempting to destroy media equipment outside Capitol

And allegedly said this into media equipment (including “This is mother f**ing America first) ===> pic.twitter.com/L98dvdwhcv

YouTuber Zvonimir Jurlina charged with destruction of property and aiding and abetting and an act of physically violence on Capitol grounds in connection with destruction of media equipment on Jan. 6: https://t.co/89mbvAUYpJ pic.twitter.com/crjBD0N6zN