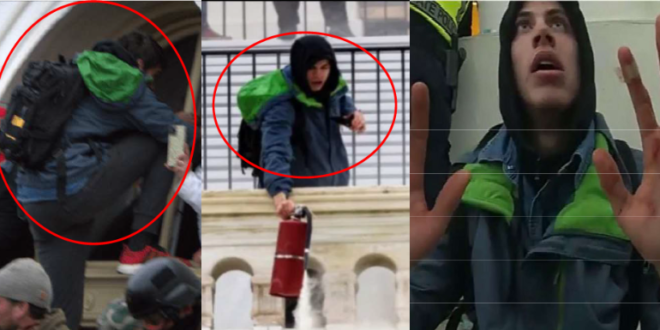 A Northern Kentucky man has now been arrested, accused in connection to the Jan. 6 U.S. Capitol breach. Nicholas James Brockhoff has been arrested on several federal charges, including assaulting, resisting or impeding officers; use of a deadly or dangerous weapon; and obstruction of law enforcement during civil disorder.

Brockhoff, of Covington, was arrested in Memphis, Tennessee, Thursday afternoon, federal officials say. According to court documents, Brockhoff is accused of spraying police officers with a fire extinguisher from a scaffolding.

Pic: Brockhoff with the helmet, per feds pic.twitter.com/AGLtnm40rH

#BREAKING: NICHOLAS JAMES BROCKHOFF of Covington, KY was arrested today in connection with the violence at the U.S. Capitol on January 6th. Stay up-to-date on all of the Capitol Breach cases here: https://t.co/dwam3OWYxd @FBIMemphis pic.twitter.com/onqYpg6MFB