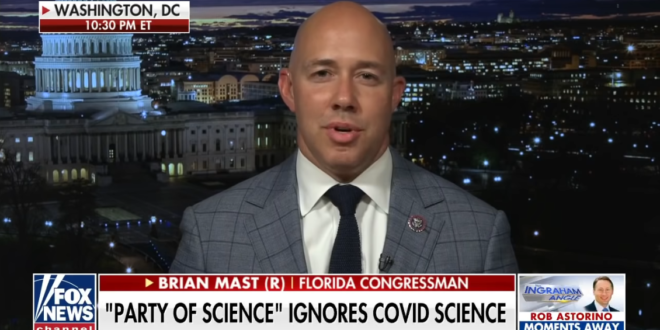 Rep. Brian Mast (R-Fla.) said Monday he will appeal a $500 fine brought by House rules requiring all members to wear masks, despite new CDC guidance allowing fully vaccinated people to go maskless indoors. The fine comes after Mast joined several of his Republican colleagues in an apparent act of protest to go maskless on the House floor, after which he said it was the “best $500 I ever spent.”

Mast’s mask-defying stunt was led by Marjorie Taylor Greene. Unlike Greene, he is vaccinated.

During last year’s campaign, Mast was forced to apologize for jokes he had made on Facebook about sex with underage girls, rape, and murder. In January 2021 he voted against accepting the result of the Electoral College.

Brian Mast is appealing a $500 fine that came after he joined GOP colleagues in going maskless on the House floor despite a mask mandate — at the time calling it the “best $500 I ever spent.”https://t.co/Gs7GUFDggf

Previous Homocon Site To Launch Campaign To Free DC Rioters: They Were Just Peacefully Walking Through The Capitol
Next Another GOP Rep Fined $5K For Evading Metal Detector