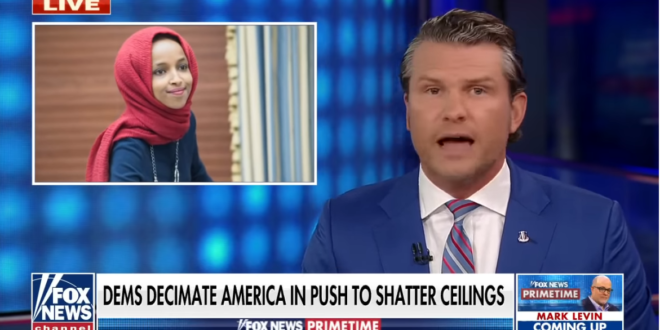 “What does unchecked illegal immigration and massive waves of refugees look like without assimilation? It looks like this. Globalist Joe loves Ilhan Omar, which underscores why his refugee move yesterday is so dangerous.

“Ilhan Omar was a refugee. She came to America as a young girl fleeing the civil war in Somalia. Following four years in a refugee camp in Kenya, she was granted asylum to the United States, eventually settling in Minneapolis.

“A few years later she was elected to the state house and then to Congress. Congresswoman Omar has chosen to return American goodwill with grievance, not gratitude.

“Inside the halls of 1600 Pennsylvania Avenue, she is the authority. And she wants more refugees just like her.” – Fox News host Pete Hegseth.