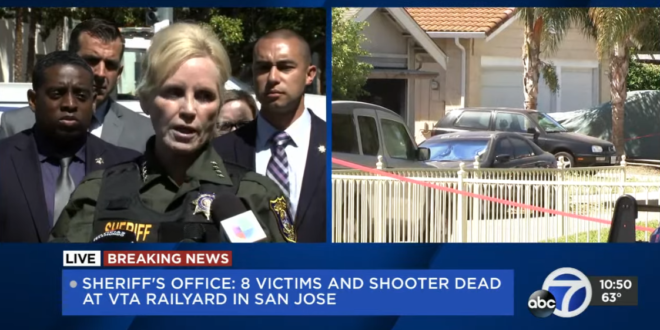 Eight people were killed and at least one person was injured Wednesday morning after a shooting at a Valley Transportation Authority yard north of downtown San Jose, according to authorities.

The Department of Homeland Security told local law enforcement seven people died at the scene and one person was taken to a hospital, with no details on their condition, according to a source.

Sheriff’s officials and VTA officials confirmed the shooting occurred at the facility at 101 Younger Ave., and some of the victims were VTA employees.

– 9 total people confirmed dead: 8 victims and the shooter
– Explosives reported at the San Jose @vta facility at 101 West Younger.
– Bomb squads on the scene
– Shooter ID not yet released

UPDATE: Breaking, 9 people killed in San Jose VTA rail yard shooting; suspect, a VTA employee, among the dead, according to Santa Clara County Sheriff’s Office. One VTA building has been found rigged with explosives devices in a remote area of the rail yard. ABC10