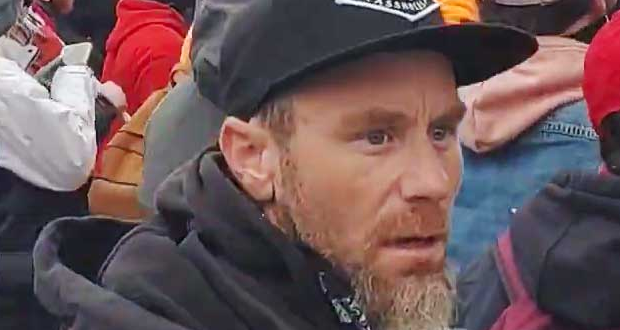 New Kent County, Virginia, man was charged in the Capitol riot Wednesday afternoon on multiple counts, including allegations he knocked an officer unconscious.

Paul Russell Johnson, 35, of Lanexa, Virginia, was arrested and appeared in court for his initial hearing on Wednesday. He faces six counts, including inflicting bodily injury on officers, obstruction of law enforcement and engaging in physical violence in a restricted building or grounds.

According to the Justice Department, Johnson was captured on video on January 6 assaulting a U.S. Capitol Police officer. Johnson is accused of pushing and pulling on metal barricades, causing a USCP officer to fall and hit her head on the stairs before losing consciousness.

BREAKING: The FBI Norfolk Field Office arrested Paul Russell Johnson, 35, in Lanexa, Virginia. Some of his charges include hurting an officer and being violent on Capitol grounds. https://t.co/uNi1KVg67p

#CapitolRiot: Paul Russell Johnson, of Lanexa, Virginia, is now charged with 6 counts, including assaulting a police officer. The DOJ says Johnson bragged on a YouTube video about “slinging” an officer around during the riot. pic.twitter.com/WZNa78O8ip