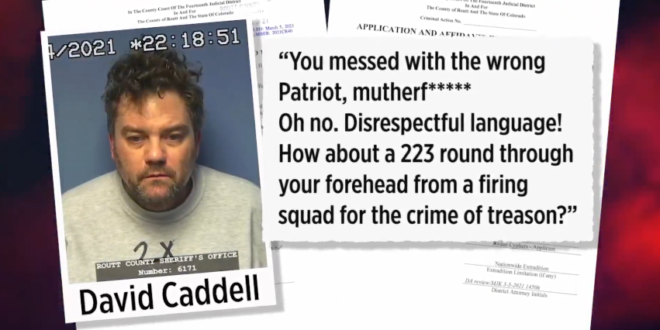 A Steamboat Springs man who was apparently upset over mask mandates now faces multiple felonies for death threats. David Caddell, 48, has been charged with attempting to influence a public servant and three counts of stalking. The charges are all connected to Tim Corrigan, the chairman of the Routt County Commission. Detectives said Caddell has also sent numerous harassing emails and phone calls to local journalists, along with city and county officials.

The most serious threats appeared to be aimed at Corrigan. “He talked about wondering how much I would like to have a .223 caliber bullet in my head,” Corrigan said. According to an arrest affidavit obtained by the Problem Solvers, Caddell sent Corrigan an email stating, “You messed with the wrong patriot, mutherf***er. Oh no. Disrespectful language! How about a 223 round through your forehead from a firing squad for the crime of treason?”