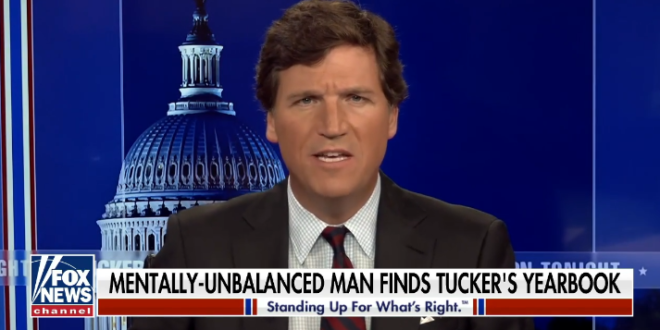 REPORT: Carlson Listed Himself In College Yearbook As Belonging To “Society” Named For Harvey Milk’s Killer

Tucker Carlson blasted The Washington Post and its media columnist, Erik Wemple, on Tuesday for looking into his background and contacting Carlson’s college acquaintances.

“Jeff Bezos had one of his minions, a mentally unbalanced middle-aged man called Erik Wemple, pull our dusty college yearbook and call around and see if we’d done anything naughty at the age of 19,” Carlson told viewers, referring to the Amazon CEO, who also owns the Post. “Let us know if you hear any good stories.”

According to Carlson, “quite a few old college classmates” had contacted him Tuesday and told him Wemple had been asking questions.

Read the full article. As for the tweet below, it’s not yet clear if such a group actually existed.

Perhaps this is the story that @TuckerCarlson was trying to get ahead of. In his college yearbook, he listed himself as a member of the “Dan White Society.”

Dan White was the man who murdered Harvey Milk. pic.twitter.com/TYklyfC8tS

Tucker Carlson says that the Washington Post has been reaching out to his college classmates pic.twitter.com/Nrgh6ORD0L