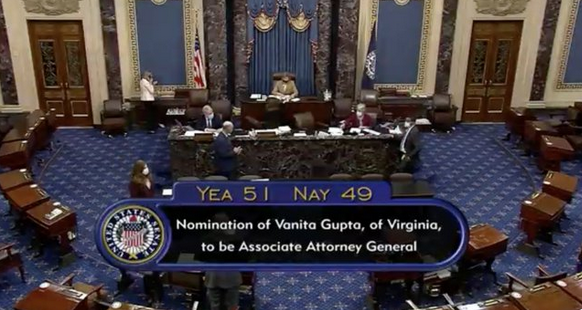 The Senate voted 51-49 on Wednesday to confirm Vanita Gupta as associate attorney general, the third-highest ranking official at the Justice Department. Why it matters: Most Republicans strongly opposed her nomination, which faced procedural hurdles after the Senate Judiciary Committee split 11-11 along party lines on whether to approve her.

Sen. Lisa Murkowski (R-Alaska) was the lone Republican to vote for Gupta’s confirmation. GOP committee members grilled Gupta during her confirmation hearing over past tweets and comments criticizing Republicans and former President Trump. She apologized during the hearing for any past “harsh rhetoric,” per Reuters.

BREAKING: The Senate just confirmed Vanita Gupta. She will now be the first woman of color and first civil rights lawyer in U.S. history to serve as associate attorney general at the Department of Justice.

An important and historic moment for our country. Remember this day. pic.twitter.com/BbZlXFmSE6

Vanita Gupta has been a steadfast champion for civil rights, a close friend to HRC and an ally to our entire movement for decades. As the next Associate Attorney General, she’ll keep fighting for equality and Americans everywhere. pic.twitter.com/Q2pruxetua

Previous REPORT: Carlson Listed Himself In College Yearbook As Belonging To “Society” Named For Harvey Milk’s Killer
Next Pfizer: Fake Vaccines Are Selling In Mexico And Poland