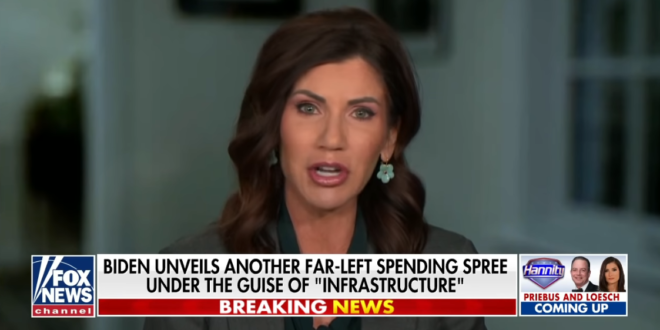 South Dakota Gov. Kristi Noem, a rising Republican star and potential 2024 presidential candidate, appeared flummoxed on Wednesday night over the fact that much of the spending in the Biden administration’s proposed infrastructure bill goes to, well, infrastructure.

“I was on a call with the White House today with all of the governors talking about the specifics of this package and I was shocked by how much doesn’t go into infrastructure,” Noem declared on Fox News’ Hannity. “It goes into research and development. It goes into housing and pipes and different initiatives, green energy.”

Kristi Noem is “shocked” by infrastructure funding going to “housing and pipes” https://t.co/pXM2URGo9R

Noem: I was shocked by how much doesn’t go into infrastructure… It goes into housing and pipes… pic.twitter.com/eQFej2gzkE

I know she’ll become sad, so here is the definition: pic.twitter.com/wipbsiteHL