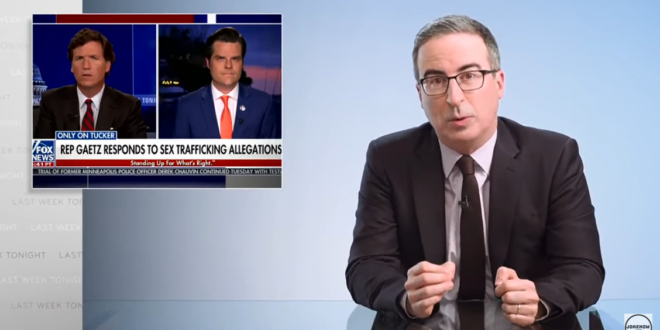 John Oliver Tees Off On Gaetz’s Interview With Carlson

Oliver cracked that Fox News host Tucker Carlson was “so clearly trying to ‘nope’ his way out of that whole interview,” joking that Gaetz is the “one white man on Earth that Tucker Carlson won’t defend.”

“He looks like he wants to walk out of his own show,” Oliver added of Carlson. “The problem is if he did that, it wouldn’t be Tucker Carlson Tonight anymore, it would be the Matt Gaetz Digs His Own Grave Adventure Hour.”

Read the full article. The best bit of the clip is when Oliver weighs in on Giuliani blustering about Lil Nas X.