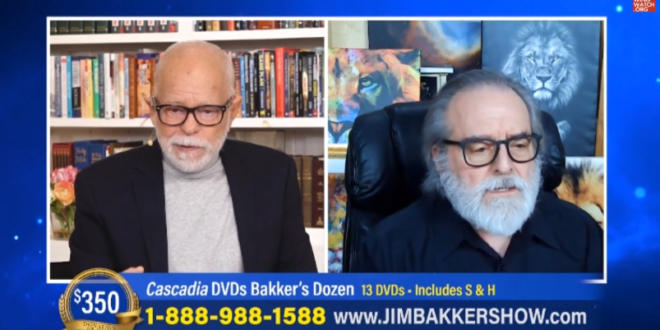 Bakker kicked things up a notch on Tuesday’s program, which featured right-wing conspiracy theorist Steve Quayle warning about aliens, demons, trans-dimensional beings, and “diseases that are designed to initiate cannibalism in human beings” and turn them into literal zombies.

The conspiracy theories promoted by Quayle were so pervasive and convoluted that it was difficult to understand exactly what he was even saying, but he seemed to be suggesting that nasal tests for COVID-19 were part of a nefarious plan to obtain DNA samples to be used in the creation of targeted biological weapons that will unleash a disease to turn everyone it does not kill into flesh-eating zombies.

“Zombies that are on the Earth are a disease like any other disease that affects people, and they become like zombies. Is that right?” Bakker asked. “That’s only part of the story,” Quayle replied. “Zombies also have the evil spiritual entity known as demon possession.”

Read the full article. Watch the clip. As you’ll see, this nutbag leans into the QAnon “adrenochrome” batshittery. ZOMBIES!