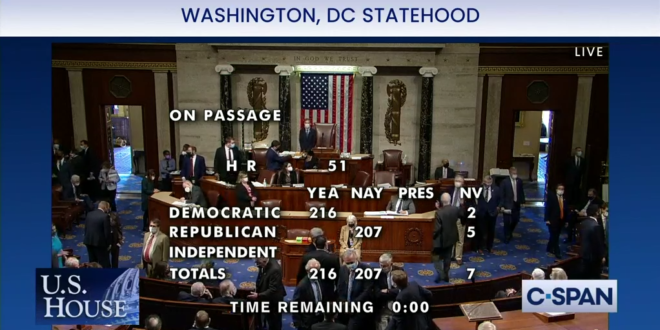 The Democratic-led House of Representatives again passed legislation Thursday that would make Washington, D.C. the 51st state — something residents and leaders in the nation’s capital have been requesting for decades. The bill passed 216 to 208.

But the Washington, D.C. Admission Act faces slim chances of advancing in the split Senate, where it would need GOP support to overcome a filibuster. Without at least 10 Senate Republican votes joining all 50 Democrats and independents, the legislation will not make it to President Joe Biden’s desk.

JUST IN: House passes bill that would grant DC statehood

The legislation now faces an uphill fight in the Senate, where it is unlikely to get enough Republican support to clear a 60-vote threshold for passage https://t.co/3VpPiWVyJw