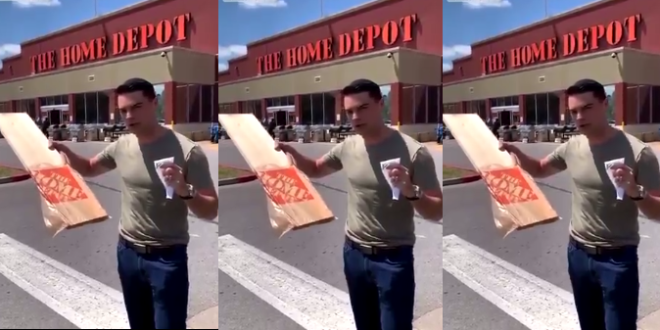 Ben Shapiro Buys Wood To Own The Libs [VIDEO]

A group of black faith leaders in Georgia are targeting Home Depot — which has its headquarters in the state — and calling for a boycott of the company because it refuses to publicly criticize Georgia’s new voting law.

In July 2019, some critics of Home Depot vowed to launch a boycott of the company after it was revealed that Bernie Marcus, who had directed virtually all of his $6 billion to charity after his death, said some of his money would fund former President Trump’s re-election campaign.

Who else is going to Home Depot today? Tweet pics buying stuff in line! https://t.co/eb9Phhkemo

So they picked Home Depot, the company founded by Jews, to boycott. Of course, they did.

Fine, only shopping at Home Depot from now on https://t.co/qtpDR6GWxn

To try to show us his support of a conservative owned company, Ben Shapiro bought a random piece of wood he knows so little about that he had it bagged.

It will be the first time there has ever been wood in his household.pic.twitter.com/VmRlZejowY

This is the face of conservative masculinity pic.twitter.com/vGiaOmFjZ9

“As you can see, I have now singlehandedly saved Home Depot from the woke leftist mob”

What’s Ben Shapiro going to do with his plank of wood?

This is all the conservative movement is now. There’s nothing constructive in it. They don’t write policy or try to solve issues. Their sole mission is trying to figure out whatever liberals are doing and do the opposite of it in hopes it’ll make liberals angry. https://t.co/Hi7Z7CCwN6