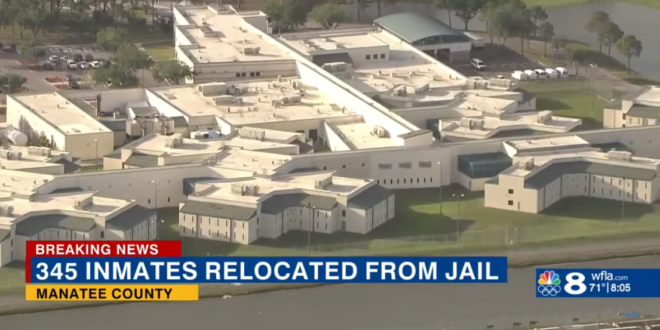 Florida state and local leaders fear an “imminent” collapse of the retention pond at the former Piney Point phosphate processing plant in Manatee County. People who live and work in the area are told to get out and stay away. In addition to a “significant leak” at the bottom of the 700-to-800-million-gallon holding pool, several small breaches recently were found. It contains a mixture of process water.

The Manatee County Sheriff’s Office says it is moving 345 inmates from the Manatee County Jail to an “undisclosed location” because of the breach at the Piney Point reservoir. The prison is within the mandatory evacuation zone, A spokesperson with the sheriff’s office said the remaining 721 inmates at the prison will be moved to the upper level of the facility as a precaution.

“The Manatee County jail is in the evacuation zone but was not being evacuated. Randy Warren, from the Manatee County Sheriff’s Office, said that relocating inmates and staff members to upper levels of the facility was “our best option right now.'”https://t.co/Z9wa2dBMMu