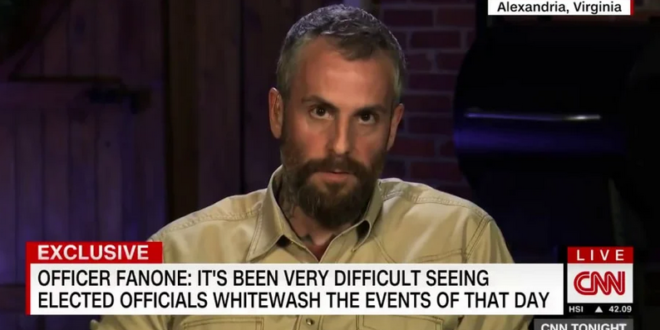 DC Cop Furious About Riot “Whitewashing” By Cultists: “I Experienced The Most Savage Combat Of My Life”

On Jan. 6, D.C. police officer Michael Fanone was swarmed by a pro-Trump mob and dragged down the Capitol steps, suffering a mild heart attack and a concussion as he was shocked with a stun gun and beaten. In the months since, Fanone said it has been “difficult” to listen to politicians like former president Donald Trump, who last month falsely claimed that rioters were actually “hugging and kissing” police, downplay the severity of the insurrection.

Asked to react to conservatives who have painted the rioters as peaceful protesters, Fanone said that rhetoric was “dangerous,” adding that he “experienced a group of individuals that were trying to kill me to accomplish their goal.” Fanone found himself needing to pause and collect himself throughout the lengthy interview, apologizing for getting emotional. “I experienced the most brutal, savage hand-to-hand combat of my entire life, let alone my policing career, which spans almost two decades,” he starkly noted.

Proud of my friend Officer Michael Fanone on @donlemon right now. Speaking truth from a man doing his job, but thrust into history. To every Capitol and @DCPoliceDept officer that day, thank you.

Michael Fanone says he “absolutely” wants his body camera footage released. He says it will show the riot was “violent” and “brutal.”

Injured DC Police Officer Michael Fanone tells CNN “It was the most brutal combat imaginable” on January 6…. “It was like nothing I’d ever seen outside of the movies” pic.twitter.com/pT1kNy8FoT

DJ Rodriguez is currently being held for electroshocking Fanone. https://t.co/WX9H4nrGAd

The feds say Thomas Sibick buried Fanone’s badge in his backyard. More of Fanone’s assailants are still at large. https://t.co/qIDl7e0BPP

Previous Cuomo May Sue Over NY’s Loss Of US House Seat
Next Hannity: My Vaccine Status Is None Of Your Business