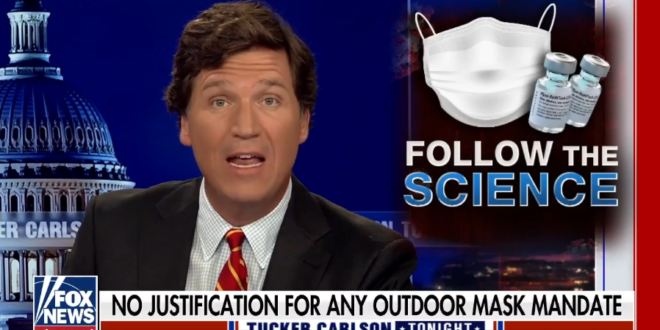 Fox News host Tucker Carlson raged against the idea of wearing face masks on Monday night, telling his viewers to openly mock those they see wearing masks outside.

“Your response when you see children wearing masks as they play should be no different from your response to seeing someone beat a kid in Walmart. Call the police immediately. Contact Child Protective Services. Keep calling until someone arrives,” Carlson said.

“What you’re looking at is abuse, it’s child abuse, and you are morally obligated to attempt to prevent it.”

Tucker Carlson is now telling his audience to harass people who wear face masks outside.

If they see children wearing masks, Tucker says the response should be no different than when you see a kid being abused — “call the police immediately, contact child protective services” pic.twitter.com/4svVH0JY3s

White supremacist rape apologist Tucker Carlson told his rabid viewers tonight to randomly go up to people who are wearing masks outside and harass them for doing the right thing. Inciting violence and threatening public health in a single segment.

I don’t know what Rupert Murdoch’s end game is with Tucker Carlson. Kill another half a million Americans? Why is he airing a guy pretending masks aren’t preventing the spread of COVID, and telling people to harass those wearing masks?

Wear a mask. You wouldn’t want people to think you watch Tucker Carlson.

Just going to point out again that Fox News own lawyers argued, and a federal judge held, that Tucker Carlson is so completely full of shit that no reasonable person would believe anything he says. This was and most likely remains Fox News’ solemn and sincere legal position. https://t.co/maeMyuvzjS