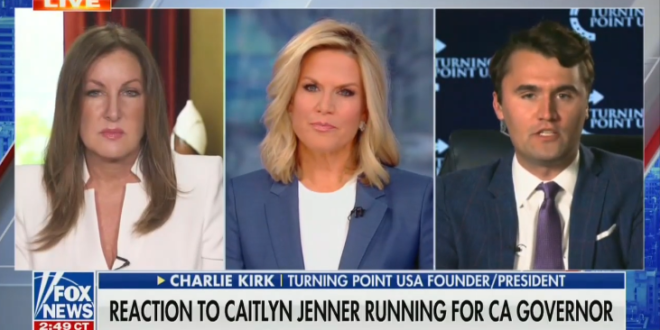 “I’m not a huge fan of the Republican Party getting behind Caitlyn Jenner. I represent a viewpoint held by half the country that biological standards matter.

“Let me say, I’ve met Jenner. Very nice person, and I think that Jenner really believes in conservative values to an extent.

“However, I represent a viewpoint that millions of other Americans hold, which is that, who are we as Republicans?

“Are we just always going to try to be the first to try to get to something or are we going to sometimes make the more difficult argument, take all the arrows and the criticism and say these are deeply held beliefs?

“I wish Jenner the best and I think the left’s obviously exposing some of their hypocrisy in their treatment of Jenner, but I’m going to make the unpopular argument when it’s rooted in truth.” – Charlie Kirk, taking care not to use any pronouns.