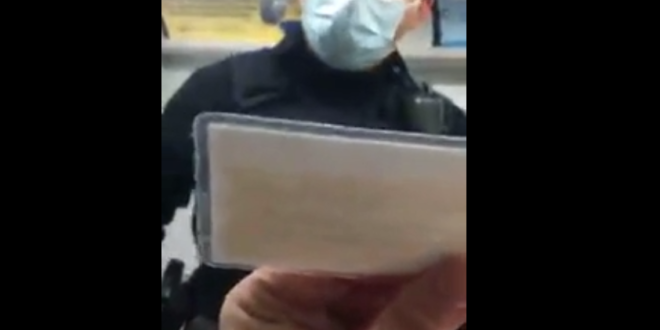 A video of a woman refusing to wear a face mask on the Canada Line despite several warnings from a Metro Vancouver Transit Police officer has gone viral on social media.

The video shows an officer donning a face mask and standing in front of the unmasked woman who is filming the video. She repeatedly tells the officer that she can’t wear a mask and shows him a medical exemption card. However, he calmly tells her that she will have to leave the train if she does not put on a facial covering.

After several warnings, the woman was eventually told that she was under arrest for causing a disturbance. “The woman resisted being arrested and kicked the officer in the groin,” police said.

More on the arrest from The Daily Dot:

After enduring more than five minutes of the anti-mask Karen’s abuse, Kwok finally informs her that he will arrest her if she does not don a face covering. She begins to bellow at this point, telling the officer to get away and “respect my social distancing.”

When Kwok begins to physically arrest her, Foley absolutely loses it. She screams that he is a “male officer” and therefore cannot touch her. In the background, other passengers appear to be encouraging Kwok to “get her off.”

Foley puts up a good fight, but Kwok eventually arrests her and removes her from the train. She continues to scream obscenities at him, calling him a “pig” and accusing him of assault.

World’s most composed transit police officer vs. “medically exempt” anti-masker resisting arrest on a train in Vancouver, BC from r/antimaskers