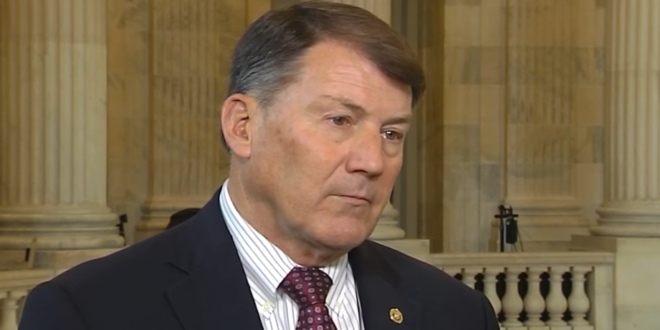 Sen. Mike Rounds (R-S.D.) tweeted a photo of a statue of himself holding a gun on Thursday, addressing President Biden directly and daring him to “come and take it” amid a Democratic push for new gun control legislation. “Careful, she bites too,” Rounds said in the tweet accompanying the photo, which shows a dog at the statue’s feet. Rounds’s tweet sparked backlash online from some users who saw it as a potentially threatening message to the president.

Hey @JoeBiden – come and take it. Careful, she bites too. pic.twitter.com/NOKWlq5aQv

The GOP has already fomented one deadly insurrection. This kind of rhetoric that can foment another armed insurrection. This seditious behavior is only aimed at getting people hurt.
Shame on you, @SenatorRounds for agitating violent rhetoric and tweeting veiled threats. https://t.co/fuaT8Nu3MW

Are you threatening to shoot the President?

You seem like the kind of angry, threatening person that background checks are designed to prevent from gun ownership, seditionist.

What is happening in South Dakota that led to someone creating a statue of a dog sniffing your nuts while you smile and hold a shotgun?