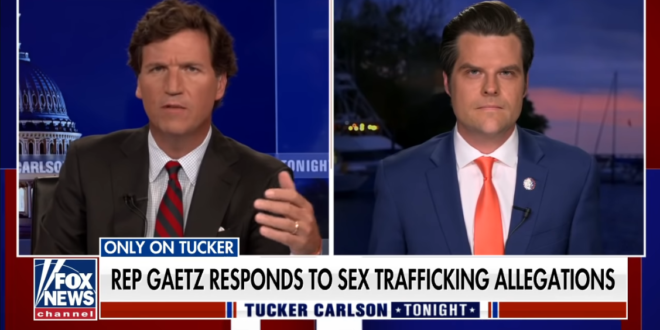 Rep. Matt Gaetz (R-Fla.) on Tuesday night defended himself amid reports he’s under investigation for sexual misconduct with a teenager in a wild interview with Fox New host Tucker Carlson.

“That was one of the weirdest interviews I’ve ever conducted,” Carlson said at the conclusion. “I don’t think that clarified much, but it certainly showed this is a deeply interesting story, and we’ll be following it. I don’t quite understand it.”

At one point in the interview, Gaetz mentioned, unprompted, allegations that there are photos of him with child prostitutes. “That’s obviously false,” he said. “There will be no such pictures because no such thing happened.”

At one point, in what appeared to be an effort to get Carlson to relate to his circumstances, Gaetz brought up a false accusation of rape brought up against the Fox host years ago.

“I’m not the only person on screen right now who’s been falsely accused of a terrible sex act,” the congressman said. “You were accused of something you did not do, so you know what this feels like.”

A somewhat befuddled Carlson responded: “You just referred to a mentally ill viewer who accused me of a sex crime 20 years ago. And of course, it was not true. I never met the person.”

During his appearance on Carlson’s show, Gaetz said the FBI had “threatened” a “friend” he brought to dinner with Carlson and his wife two years ago.

“I can say that actually, you and I went to dinner about two years ago, your wife was there, and I brought a friend of mine, you’ll remember her, and she was actually threatened by the FBI, told that if she wouldn’t cop to the fact that somehow, I was involved in some pay-for-play scheme, that she could face trouble,” Gaetz said.

Carlson replied: “I don’t remember the woman you’re speaking of or the context at all, honestly.”

Matt Gaetz vows to Tucker Carlson he didn’t “travel” with a 17-year-old, but his denial seems pretty specific and carefully worded pic.twitter.com/emGePJeVfV

“I’m not the only person on screen right now who has been falsely accused of a terrible sex act. You were accused of something you did not do” — Matt Gaetz to Tucker Carlson pic.twitter.com/OmPXtAyHyb

Tucker Carlson responds to Matt Gaetz casually mentioning that someone accused him of a sex crime. Yikes. pic.twitter.com/GkcCP1yZnZ

Gaetz again bizarrely implicates Tucker Carlson in his own personal peccadillo, then says, “providing for flights and hotel rooms for people that you’re dating who are of legal age is not a crime” pic.twitter.com/wD0hUmwGGN

Gaetz mentions that someone has alleged there’s photos of him with child prostitutes. He claims such pictures don’t exist. pic.twitter.com/GSCz9ea8T4

Gaetz concludes by saying he’s a victim because “I’m a well-known, outspoken conservative, and I guess that’s out of style in a lot of parts of the country right now.” (The investigation of him began when Trump was still in office.) pic.twitter.com/9RwHspQEwX

Wow. Back from commercial, Tucker Carlson proclaims that the interview he just conducted with Gaetz was “one of the weirdest interviews I’ve ever conducted.” pic.twitter.com/85Fnyv4Km9