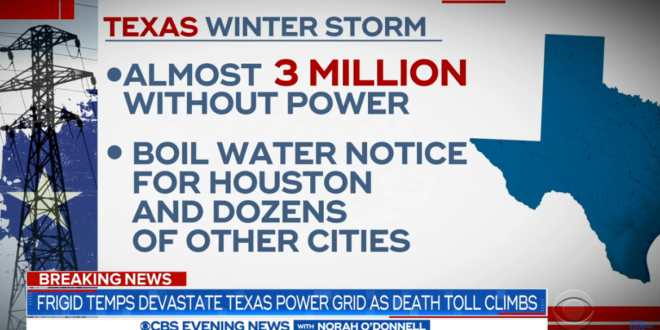 As millions of Texans continue struggling through a dayslong winter storm without power or potable water, Gov. Greg Abbott provided few details Wednesday on when they can expect their situations to improve.

Texans running low on food are finding empty grocery store shelves. Food pantries are running out of supplies. And the freeze has wiped out substantial portions of the state’s citrus and vegetable crops.

With the Texas governor taking a page out of Trump’s book and lying about the cause of the crisis there, maybe it’s time to start asking if we can make it illegal for top government officials to knowingly lie to the public about certain things.

There are still widespread power outages in Texas for a 4th day in a row. The food supply is disrupted in parts of the state and now, nearly a quarter of Texans are under boil water advisories because treatment plants are down.@JanetShamlian has more from Houston. pic.twitter.com/3HjpPZt56b

Note to self: Don’t park under water lines during historic winter storms in Texas. 🥶

This is in the parking garage of Mosaic Dallas in downtown Dallas. pic.twitter.com/1eQn2L3QkB