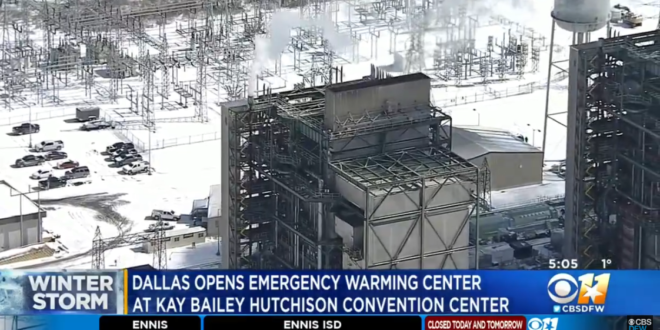 At least eight deaths have been linked to a dangerous winter storm system that’s breaking records across the country. Some four million homes and business in Texas were without power as of 5:15 Tuesday morning local time as the electric system struggled to meet demand, according to poweroutage.us.

Among the dead were a woman and girl who were in an attached garage in Houston where a car was being run because the lack of power meant there was no heat in the home, reports the CBS affiliate there, KHOU-TV. Authorities said they suffered carbon monoxide poisoning.

Texas Gov. Greg Abbott announced late Monday that the Texas National Guard was being deployed to help get people to heating centers. He said state agencies are sending additional resources and personnel to help local officials clear roadways and to assist essential workers.

“The state has also deployed resources to assist Texans without power and to help essential workers continue to carry out their jobs,” Abbott said in a statement. “In the meantime, I encourage all Texans to continue to stay off the roads, and conserve energy as state agencies work with private providers to restore power as quickly as possible.”

Oncor, an energy company serving parts of north Texas including Dallas, tweeted Monday that the state’s power system “is currently facing an unprecedented shortfall of electric generation,” and that ERCOT “has requested Oncor & utilities across TX to implement controlled power outages.”

The Texas National Guard always steps forward to serve and protect the people of Texas when needed.

Now they are deployed across the state to help move vulnerable Texans to warm shelters.

Ever wonder why TX has to do things like rolling blackouts during extreme weather? The answer is because we’re the ONLY state that has isolated our power grid from the rest of the country in order to avoid Federal regulation! https://t.co/GfqPZ9Tifp

I ache for Central Texas, but I can’t help noting the irony here: when California’s heat and fires led to rolling blackouts there last year, Greg Abbott and Ted Cruz called it a failure of liberal energy policy. Now climate change is doing the exact same to them. https://t.co/SCPJHjmwie