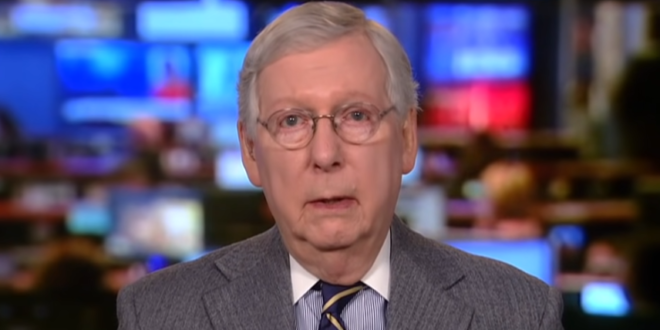 From McConnell’s op-ed in the Wall Street Journal:

There is no question former President Trump bears moral responsibility. His supporters stormed the Capitol because of the unhinged falsehoods he shouted into the world’s largest megaphone. His behavior during and after the chaos was also unconscionable, from attacking Vice President Mike Pence during the riot to praising the criminals after it ended.

I was as outraged as any member of Congress. But senators take our own oaths. Our job wasn’t to find some way, any way, to inflict a punishment. The Senate’s first and foundational duty was to protect the Constitution.

Some brilliant scholars believe the Senate can try and convict former officers. Others don’t. The text is unclear, and I don’t begrudge my colleagues their own conclusions. But after intense study, I concluded that Article II, Section 4 limits impeachment and conviction to current officers.

McConnell let the lies Trump told go on for weeks, thinking they could help if they kept Republican voters mad enough to win the GA runoffs. He then voted to acquit Trump on a technicality of McConnell’s own making. Spare me. https://t.co/vNvLKokz3m

Mitch McConnell defends his vote to acquit a guilty Trump, saying the Senate isn’t a “moral tribunal” and also this rich line:

“This selective disregard for rules and norms is a civic disease that is spreading through the political left.” https://t.co/4Og1KXvMEp