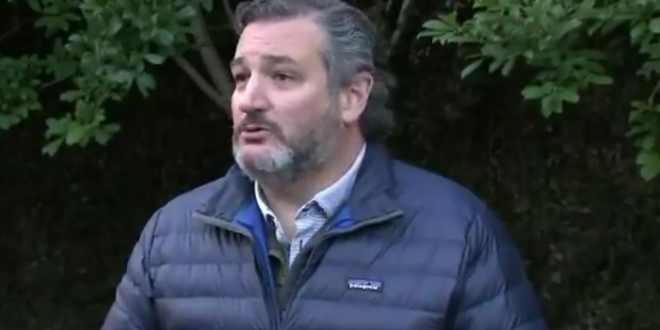 Texas Sen. Ted Cruz is taking heat after flying to Cancun as his home state suffers through a deadly winter storm crisis. He arrived back in Houston Thursday to a political storm.

A handful of protesters with signs were waiting to greet Cruz outside his Houston home. He was roasted on social media once photos of him on an airplane started to circulate. Cruz admitted he flew to Cancun but said he was only staying overnight.

KHOU 11 confirmed that he was originally scheduled to return with his family this weekend but decided to cut the trip short after the uproar. An AP source with knowledge of the situation earlier said the trip was “long-planned.”

Senator Cruz confirms to reporters he’d planned to stay in Cancun through the weekend.

When the power went out at his home & school was canceled, his kids said “let’s go somewhere where it’s not so cold,” so they booked the trip to Cancun.

He claims he started having second thoughts “almost from the moment I sat down on the plane.”

He also notes he “saw the initial firestorm” after arriving in Cancun and that, coupled with his “second thoughts,” prompted him to change his flight.

“Leaving when so many people were hurting didn’t feel right and so I changed my flight to come back today,” Cruz says.

“When it became more and more of a firestorm it became all the more compelling that I needed to come back.”

Cruz: “It was obviously a mistake and in hindsight I wouldn’t have done it.”

You can hear protesters chanting “Resign” in the background as @tedcruz now says it was “obviously a mistake” to go to Cancun. pic.twitter.com/dDeuXr9oq2