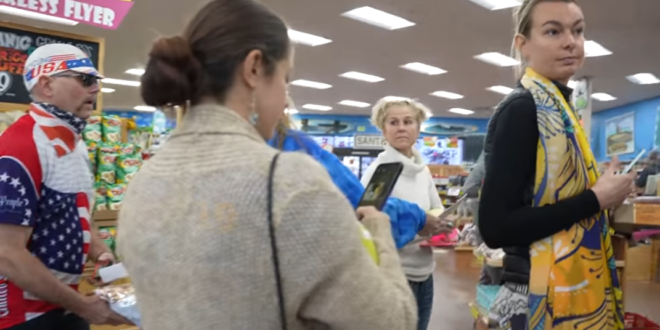 The group came into a Trader Joe’s over the weekend and ignored calls from store employees to leave. They say they have the right to shop freely at a business open to the public without wearing masks, but Santa Cruz PD says that’s not the case. They say private stores can refuse service. The video shows the group of about a dozen maskless shoppers rushing into a Trader Joe’s. The group, which calls themselves freedom advocates, is then asked to leave multiple times by workers.

Santa Cruz County is currently under an order requiring face coverings, which states that violators could face fines or go to jail for failure to comply. But in a statement to KION, Tim Welch with the group said: “There is no law passed by the legislature requiring anyone to wear a mask. Contrary to popular opinion, any store open to the public cannot unlawfully discriminate by requiring customers to wear a mask.”

Read the full article. The covidiots call their stunt “Operation Money Drop.” They rush the doors in a group with a list of items to collect and then toss the (allegedly) correct amount of money at the cashiers who presumably would refuse to ring them up. Somehow that’s a victory.