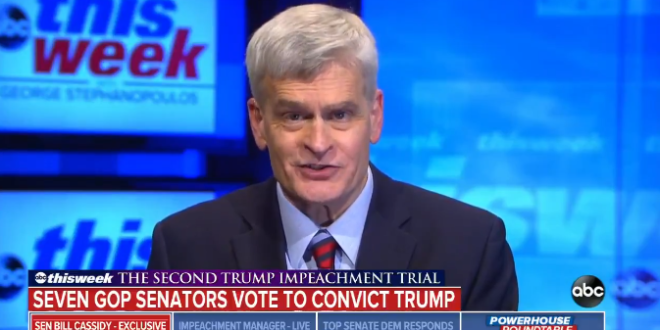 Cassidy Shrugs Off Censure By State GOP: It Was Clear Trump “Wished Lawmakers To Be Intimidated” [VIDEO]

“It was clear that he wished lawmakers be intimidated. And even after he knew there was violence taking place, he continued to basically sanction the mob being there. And not until later did he ask them to leave. All of that points to a motive and a method, and that is wrong. He should be held accountable.”

“That’s the trust that I have from the people who elected me, and I’m very confident that as time passes people will move to that position.

NEW: GOP Sen. Bill Cassidy, one of seven Senate Republicans who voted to convict former Pres. Trump in his second impeachment trial, explains his decision: “It was clear that he wished that lawmakers be intimidated.” https://t.co/DZBFQh5kXW pic.twitter.com/tkJy8Mp4g0

Previous Raskin: “No Regrets At All” On Trial Strategy [VIDEO]
Next Former Rep. Sean Duffy: Nancy Pelosi Knew Capitol Attack Was Coming And Did Nothing About It [VIDEO]