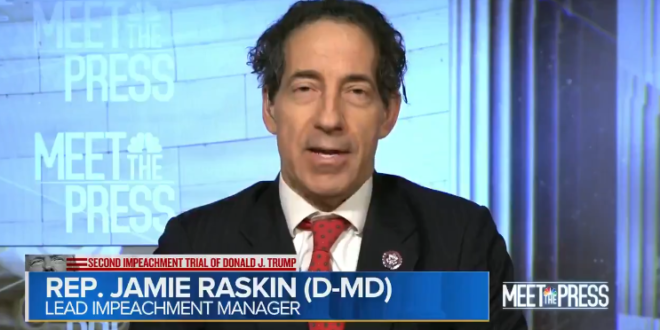 Raskin: “No Regrets At All” On Trial Strategy [VIDEO]

Rep. Jamie Raskin (D-Md.), who served as the lead impeachment manager in former President Trump’s second impeachment trial, said Sunday that Democrats had “no regrets at all” despite Trump’s acquittal. NBC’s Chuck Todd asked if, in hindsight, Raskin believed Democrats could have secured more Republican votes by adding a dereliction-of-duty article.

“[W]e have no regrets at all. We left it totally out there on the floor of the U.S. Senate, and every senator knew exactly what happened. And just go back and listen to McConnell’s speech,” Raskin responded on “Meet the Press,” referring to Senate Minority Leader Mitch McConnell (R-Ky.), who criticized Trump shortly after voting to acquit him.

Raskin: “It was by far the most bipartisan majority thats ever assembled in the senate to convict.” pic.twitter.com/PdthTla30o

Previous Graham: Harris Will Be Impeached If GOP Wins House
Next Cassidy Shrugs Off Censure By State GOP: It Was Clear Trump “Wished Lawmakers To Be Intimidated” [VIDEO]