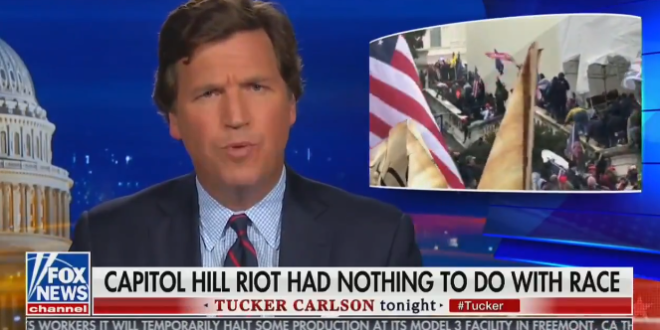 “We oppose hurting people on the basis of their race no matter who is doing it, no matter how they are justifying it. So, again, we’re always against racism. But five people out of 199 arrested? How is that a white supremacist insurrection?

“If it is, then we have other questions, such as how many Black supremacists are there at your average BLM riot? Now, we don’t know the answer to that because no journalist would ever ask that question.

Tucker Carlson: “The people at the Capitol believed the presidential election was unfair. They have reason to believe that.”

He adds: “Big Tech attacked our democracy much more effectively than any foreign power has… So it wasn’t entirely the protester’s imagination.” pic.twitter.com/l9GAs8XCpJ

They carried confederate flags and called black police officers racial slurs. No evidence? Who advertises on this show?https://t.co/jG24JaX1PV