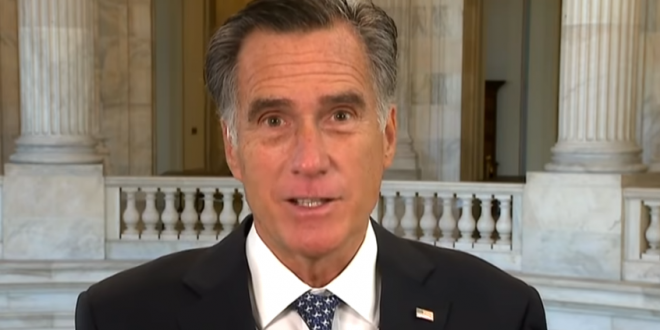 From a statement issued today by Sen. Mitt Romney:

The egregious ploy to reject electors may enhance the political ambition of some, but dangerously threatens our Democratic Republic. The congressional power to reject electors is reserved for the most extreme and unusual circumstances. These are far from it.

More Americans participated in this election than ever before, and they made their choice. President Trump’s lawyers made their case before scores of courts; in every instance, they failed.

The Justice Department found no evidence of irregularity sufficient to overturn the election. The Presidential Voter Fraud Commission disbanded without finding such evidence.

My fellow Senator Ted Cruz and the co-signers of his statement argue that rejection of electors or an election audit directed by Congress would restore trust in the election. Nonsense.

This argument ignores the widely perceived reality that Congress is an overwhelmingly partisan body; the American people wisely place greater trust in the federal courts where judges serve for life.

Members of Congress who would substitute their own partisan judgement for that of the courts do not enhance public trust, they imperil it.

Were Congress to actually reject state electors, partisans would inevitably demand the same any time their candidate had lost. Congress, not voters in the respective states, would choose our presidents.

Adding to this ill-conceived endeavor by some in Congress is the President’s call for his supporters to come to the Capitol on the day when this matter is to be debated and decided.

This has the predictable potential to lead to disruption, and worse. I could never have imagined seeing these things in the greatest democracy in the world. Has ambition so eclipsed principle?

A fundamental, defining feature of a democratic republic is the right of the people to elect their own leaders. The effort by Sens. Hawley, Cruz, and others to overturn the results of the 2020 presidential election in swing states like Pennsylvania directly undermines this right.

They fail to acknowledge that these allegations have been adjudicated in courtrooms across America and were found to be unsupported by evidence.

President Trump’s own Attorney General, Bill Barr, stated ‘we have not seen fraud on a scale that could have effected a different outcome in the election.’

Previous Navarro Lies That Inauguration Can Be Postponed
Next PA State Rep Dies Of Aneurysm At 42, Was COVID+