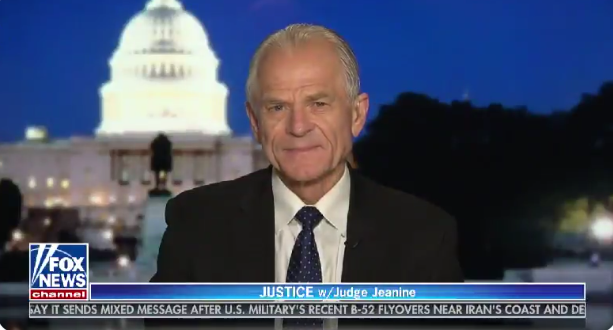 Navarro Lies That Inauguration Can Be Postponed

“They stole this and we can prove it,” Navarro said as Pirro nodded along. They cannot prove it. Since the November 3 election, Trump’s campaign and various allies have filed dozens of lawsuits in multiple states and with the United States Supreme Court. To date, they have been unable to even allege levels of fraud that would overturn Biden’s victory in even one state, much less the multiple states needed to flip his Electoral College victory over Trump.

Fuck Peter Navarro. Fuck @JudgeJeanine. Fuck @FoxNews. You all are attacking our democracy and inciting violence. We will fight to defend our democracy against your attacks. Fuck you all. https://t.co/cjCYPgQsER

Peter Navarro is lying on both points. Pence has no authority to do anything other than open an envelope and hand the contents to congressional clerks who add the totals of electoral votes. Inauguration Day January 20 is in the constitution. It can’t be changed. https://t.co/MbOQ346J6X

Peter Navarro is the asshole who purchased 60M doses of unproven drugs, the criminal who set up a $765M Kodak insider trading fraud scheme, the scumbag who wouldn’t know economics if it punched him in the face. Biden’s inauguration won’t be postoned. Navarro is a fucking idiot.