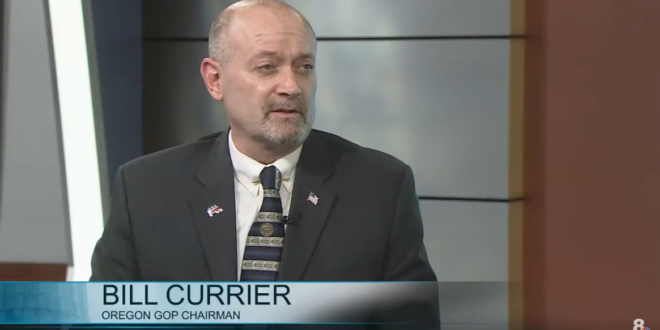 Three weeks after hundreds of people stormed the U.S. Capitol in a violent rampage that left one police officer and four rioters dead and led to more than 100 arrests of the pro-Trump rioters, the House delivered an article of impeachment to the Senate, charging the former president with inciting the mob.

Last week, the state party released a resolution passed by its executive committee that says the supposedly fake operation was meant to undermine Trump and give more power to President Biden, citing websites by John Solomon and the Trump-friendly Epoch Times.

The Oregon GOP announced a resolution calling the Capitol riot a “false flag” and falsely claimed that the riot was “designed to discredit” Trump, his supporters and to motivate the an impeachment https://t.co/h52ys7XZLk

Oregon GOP passes a formal resolution calling the attack on the Capitol “a false flag” and comparing it to the Reichstag fire. https://t.co/hcHOoomXB8

There are a number of GOP state parties that are more accurately described as Q Parties. Oregon, California, Texas and Arizona are among them. Understanding what side controls what in the GOP civil war will be key to understanding and covering it.

I get that Oregon and Hawaii have really weak GOPs and so the people who rise to the top of them tend to be marginal 8kun incel freaks who thrive on psycho conspiracies, but what happened to Arizona’s GOP? Horse kick them in the head?