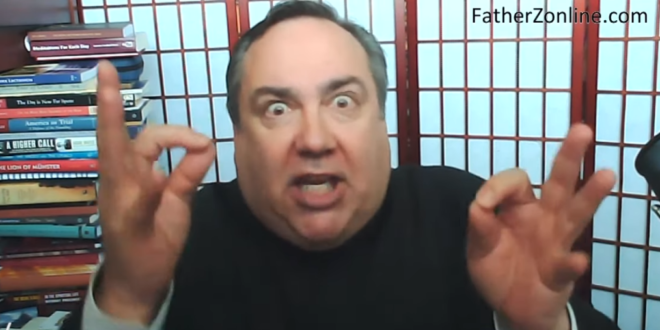 A conservative Madison priest and blogger has left the Madison Catholic Diocese after performing live-streamed exorcisms aimed at rooting out what he, former President Donald Trump and other Trump supporters have falsely claimed was widespread fraud in the Nov. 3 presidential election.

Rev. John Zuhlsdorf also claimed he had permission to conduct the exorcisms from Madison Catholic Diocese Bishop Donald Hying — an assertion Hying has said is false as well. The exorcisms have since been removed from YouTube.

Hying has said that he did not give Zuhlsdorf permission to conduct exorcisms related to “partisan political activity,” but rather several months ago approved an exorcism “for the intention of alleviation from the scourge of the coronavirus pandemic.”

Read the full article. Zuhlsdorf has posted a money beg.

On his blog, along with his regular reflections on traditional liturgy, Zuhlsdorf has been an ardent critic of Pope Francis and been sympathetic to much of Trump’s agenda.

In 2017, he helped spearhead an effort among fringe right-wing websites that led to the cancellation of a talk by Fr. James Martin at Theological College at the Catholic University of America in Washington, D.C.

Although Martin’s talk was on “Encountering Jesus: Meeting the Jesus of History and the Christ of Faith,” Zuhlsdorf ire was directed at Martin due to his new book on LGBT Catholics.