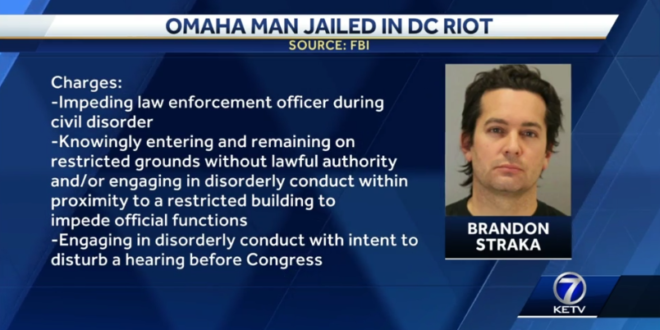 Patriots, The entire #WalkAway team wants to thank you for your concern for Brandon.

We want to let you all know that Brandon has been released from jail and is doing well.

There is a long road ahead of him but he’s strong and he’s looking forward to the future.

We’ve had a lot of people ask how they can support Brandon’s legal defense.

We are looking into a solid platform that can handle this type of initiative so we’ll let you know once we have that worked out.

Based on the advice of counsel, Brandon will be taking some time with friends and family that support him, so you won’t hear from him much for the time being – but he asked that I convey to you that he appreciates all of the support so much and he’s thinking about all of you during this time.

The team will continue to update you as we can. Thanks so much for your support and well wishes. God Bless.

Straka was released from custody on Wednesday with the stipulation that he may not leave Nebraska. The date for his preliminary hearing has not been announced. The tweet below is from a Newsmax host.

I am growing increasingly concerned about @BrandonStraka —where is HE? Why haven’t we Heard from HIM? What’s going ON??????????????? They are making a Federal Case out of this when he DID NOT 1. Hurt anyone 2. Break anything 3. Enter the Capitol—-what GIVES? WHERE IS HE?

Previous Dem Rep Is Moving Her Office After Maskless QAnon Rep And Staffers “Berated” Her In US Capitol Hallway
Next OOPS: Florida Gov Seeks $1B To Battle Rising Seas