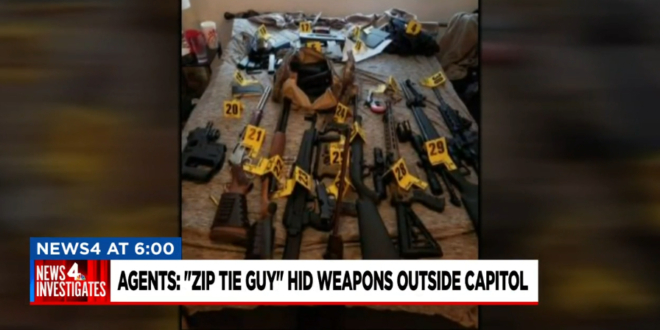 Federal agents claim the iPhone video Eric Munchel recorded of himself taking part in sacking the U.S. Capitol is being used as evidence against him, a federal detention memorandum shows. That memorandum, obtained by News4 Investigates, was filed to try and keep Munchel in federal custody and details how federal agents found 15 firearms in his apartment in Nashville, including a sniper rifle with a tripod.

The filing also claims that Munchel stashed weapons outside the capitol before entering. Munchel became known as the “zip tie guy” on social media after being spotted inside the Capitol carrying zip ties in the halls of Congress. In the filing, agents detail what they found during a search warrant inside Munchel’s home, including 15 firearms, assault rifles, a sniper rifle with a tripod, other rifles, shotguns, and pistols, and hundreds of rounds of ammunition.

Previous PayPal Zaps Money Beg By Woman Arrested For Riot
Next Carlson: Biden Wants To Bring In Killers And Rapists