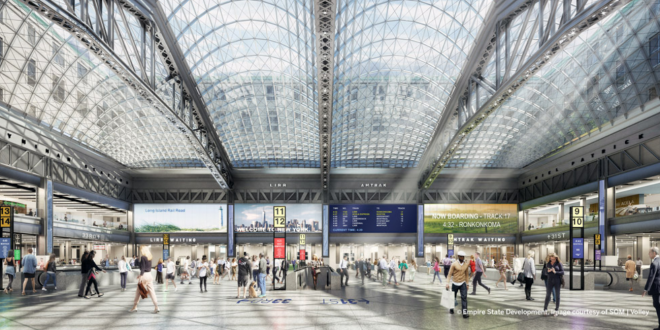 For more than half a century, New Yorkers have trudged through the crammed platforms, dark hallways and oppressively low ceilings of Pennsylvania Station, the busiest and perhaps most miserable train hub in North America.

Entombed beneath Madison Square Garden, the station served 650,000 riders each weekday before the pandemic, or three times the number it was built to handle.

But as more commuters return to Penn Station next year, they will be welcomed by a new, $1.6 billion train hall complete with over an acre of glass skylights, art installations and 92-foot-high ceilings that Gov. Andrew M. Cuomo, who championed the project, has likened to the majestic Grand Central Terminal.

Work began in 2017 on the $1.6 billion conversion of the former post office into a transit hub, with Skidmore, Owings & Merrill leading the adaptive reuse project.

“New Yorkers have known for decades that Penn Station needed to be reimagined—and after years of work, the Moynihan Train Hall will open on time and on budget at the end of 2020,” Cuomo said in a statement.

Named after New York Senator Daniel Patrick Moynihan, an architecture buff who pushed for the project, the 255,000-square-foot train hall is located across 8th Avenue from the current Penn Station, between 31st and 33rd streets, and increases its capacity by 50 percent.

One of the most exciting features of the new Train Hall is a 92-foot-high skylight that hangs above an atrium roughly the size of Grand Central Terminal’s Main Hall. The skylight will bring natural light, something Penn Station commuters have always wanted, into the train hall.

Seventeen tracks accessible from the new train hall will serve all LIRR and Amtrak trains. The station also features comfortable ticketing and waiting areas with new food and retail options.

State-of-the art way-finding LED and LCD displays will give riders all of the information they need about incoming and outgoing trains and free public Wi-Fi will be available throughout the station.

The new Moynihan Train Hall will be opening in NYC next to Madison Square Garden this coming Thursday, January 1, 2021. The space brings back some of the spaciousness that was the old Penn Station. pic.twitter.com/FRJyo4w5H3