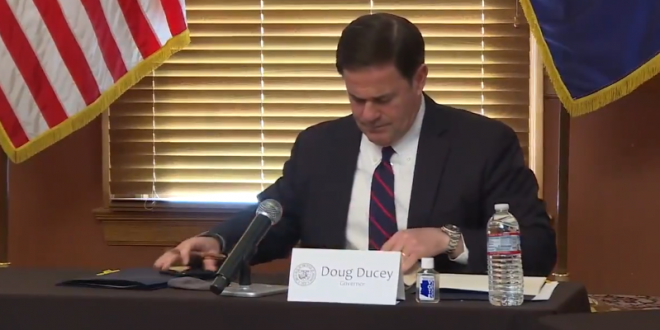 President Donald Trump called Arizona’s Doug Ducey as the governor certified the state’s election for Joe Biden, according to a tweet from journalist Brahm Resnik. Several Twitter users suggested that the president attempted to commit election fraud by placing the phone call, but there is no evidence to show why he called.

In a video that showed Ducey officially signing the paperwork, his cell phone began ringing about seven seconds in, and it played “Hail to the Chief.” In the middle of looking through stacks of papers, the governor reached into his pocket calmly and silenced his ringing phone instead of answering it.

HE’LL GET BACK TO YOU Back in July, Gov. Ducey said he changed his White House ringtone to “Hail to The Chief” so he wouldn’t miss a call from Trump/Pence. Guess who called while Ducey was certifying Arizona’s election? (7 secs in) pic.twitter.com/bzBGpfSIDf

It’s hilarious that Ducey muted trump’s call. But there’s not one fucking funny thing about a sitting president calling local officials to try and overturn our elections. https://t.co/OCNppVNlRx